Are you sure there isn't an egot also inside of you?

Ok, now lets get back to our books. The story I'm presenting today is one that has really gained a place in my heart. It is the story of a person, from childhood to adulthood, full of interesting notions, but above all a book that will make you think about delicate themes and that will touch your soul with some very intimate and moving passages. 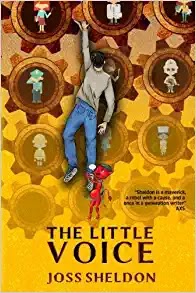 
Yew Shodkin is a person with an uncompromising personality that starts manifesting when he is just a child, and the little creature living inside his head, the egot, makes itself know in a rather flamboyant manner. Unfortunately for him, the way he sees things does not comply with what society considers to be respectable. He longs for nature, freedom, for an unstructured way of living, the exact opposite of what he’s supposed to do. His unconventional behaviour earns him many punishments, which, little by little, and with the aid of other coercive methods of persuasion, lead him to suffocate his own aspirations in order to conform to the rest of ‘civilization’. Yew isn’t happy though. He has done everything that was asked of him; he has been a very good student, he has been very dedicated and accurate in all the jobs he’s taken, even if they were below his capabilities, nonetheless, success hasn’t smiled at him; he always seemed to be somewhat transparent. At a certain point he realizes that there’s something wrong in this situation, it just isn’t fair. This is when he decides he’s had enough, he doesn’t want to be a puppet anymore, he wants to start listening to his self again, to the little voice inside of him.
It is a very vividly narrated story that follows the style of an autobiography. Some passages can be almost crude, both materially and psychologically. For instance, in the description of the main character as a child, when he gets one of his urges to do something out of the ordinary, such as pulling one of his companion’s hair, making her cry, or, on the opposite direction, when he suffers all kinds of provocation without defending himself, but he’s the one getting punished all the same. Again, very poignant when the author describes Yew’s experiences with drugs. To modern people, exposed to all kinds of stimuli, the single episodes, summarized as I’m reporting them, might seem almost trifling, but think back. Joss Sheldon has a way of entering into the mind and flesh of his character, describing what happens to him in such a manner, so real, so pure, that you cannot escape entering into that mind and flesh yourself, feeling all of those experiences on your very skin. The book is written beautifully, both in the way of pace and for the choice of language. Never vulgar, never brutal, not even in the crudest moments, I would say at times it is really lyrical, though free of drama. The slow agony of the egot, for instance, is a good example of this, but the climax is reached at the end of the book, with that epilogue that brings everything together and is so incredibly touching.


This is a very very intense book, a heavy one in terms of contents. There are notions of psychology, quotes of great wisdom and many concepts that are food for debate. All of this offered to the reader in a light and elegant style.