An amazing novel filled with adventure and insight on human behaviour.

The novel I'm recommending today has been a great revelation to me. It is written exquisitly well, with a perfect balance between action and reflection, that will make you look inside yourself questioningly. I like to point out also the beautiful cover. 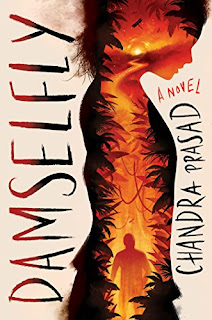 
One word: fantastic! I have absolutely loved this book from the very beginning. The setting is that of Lord of the Flies, only with a fresh, contemporary cut. A group of teens, forming the fencing team of the private school Drake Rosemond, find themselves stranded on an island after a plane crash. The small island is mostly covered by the thick vegetation of a jungle, an overwhelming environment to which the youths must adapt quickly, just as they must immediately deal with the loss of some of their companions. Thanks to Mel, a capable and pragmatic young woman, having extensive knowledge about plants and natural things, they manage to settle down to an acceptable routine, while finding their way around the island, hoping they will soon be rescued. Nonetheless, help doesn’t come; instead they are faced with a new problem: they are not alone on the island, and whoever lives there wants them out without delay. As time goes by, difficulties and fear bring out each person’s true personality, for good and for bad. Some find they perfectly fit with this new, wild environment, others find a purpose in their life. This does not apply to Mel and Sam though, they have someone to get back to, and they can see beyond the idyll of the moment. The relationships between the members of the group have already been put to the test many times, on the long run things could degenerate dangerously as the balances of power switch rapidly.

This book is a perfect balance of pace and exploration of the circumstances and behaviours of the characters. Details of each person’s history trickle throughout the narration, forming a background allowing the reader to understand the character’s actions. However, you can also perceive how each youth evolves from that background, drawing on the new circumstances to bring out aspects of their personality that their former situation had not allowed to emerge. The author makes a truly masterly job out of portraying her characters; with fairness and realism she shows both the positive qualities and the hidden dark corners in the souls of all her protagonists. They are so well depicted that the whole of mankind is reflected in them. I personally found myself very close to Sam’s personality, I even found myself loathing the way some among the characters behave, but then I stopped to think. I asked myself whether I was so sure I would have been able to stick to all of my convictions so strongly and unyieldingly in such a situation. I couldn’t give myself an answer, so I came to the conclusion that most of us contain most of the good and bad shown by each of those youths, and until you’re tested you can only hope you’ll be able to remain the righteous person you are in your usual circumstances. Yes, I do believe there are personalities more inclined to compassion and others to selfishness. I do believe the concepts of justice, right and wrong, remain the same even in extreme conditions. What can be debated, instead, is whether most of us would still be able to elaborate those concepts keeping the same coordinates that guide us in daily life.
This book offers plenty of food for thoughts on many issues, including the hypocrisy hidden behind many ordinary conventions, and how even the best of people can be superficial or naive in certain instances. This novel would be a great choice for an open discussion at the library. Also, the narration is gritty but never gruesome, and when it is delicate, it is never quixotic.
Great style, very well written and rich in content.

Click here to purchase the book or read more about it.